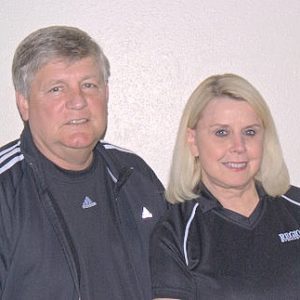 The Barto’s were the backbone of the Phillips 66 gymnastics club for over 33 years. Sam stumbled into gymnastics while teaching elementary physical education at Mustang in 1974.  “We decided it would be a nice thing to give up a weekend and do a gymnastics clinic for them and to raise some money for a mat so the next time we did the course we would have one,” Barto explained. When more than 200 girls showed up for the clinic the Barto’s had found a career.

During that time, their teams competed against Phillips 66 kids and had also competed at a Phillips meet in Bartlesville.

When the Phillips coach Randy Schumacher left in 1981 to return to Colorado, Sam Barto was hired to guide the gymnastics team. The Bartos stayed for 33 years until July 12, 2014, when they both retired after 40 years coaching gymnastics in Oklahoma. Sam and Susie grew the Phillips meet from 66 competitors in 1981, to more than 800 in 2014.

At the time of their retirement, the program had 137 girls on their team and another 450 kids in classes.

In 1993 Sam was honored with the Shannon Miller Award for his contributions to Oklahoma gymnastics and in 2002 Susie won the award.  Susie also served for more than 30 years as the chairman of the United States Federation of Gymnastics in Oklahoma.

No Replies to “Sam and Susie Barto”